Success in the midst of failure 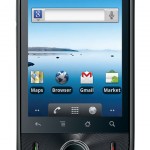 I wanted to say a few words about an experience Trey had over the last couple weeks in my advanced Computer Science classroom. Students in that class, for their “final exam”, have to create an application for the Android, prepare a complete on-line video tutorial for making that app, and then lead their parents through that tutorial during a Parent Workshop one evening at the end of the semester. Over the last few weeks of class, students spend time creating the app itself, then create a teaching video which explains not only how to do it, but more importantly why they are doing those steps, what the commands mean, and how they play a part in the completed app. Mom and dad are invited to the Computer Lab and together with their child (in a supporting role much like I am as a teacher in that class), they work through the tutorial together, creating their first Android app in a student-led Android Workshop. It’s a fantastic evening with mom and dad usually blown away experiencing what their kids have been doing…and then to have their own child lead them through doing it themselves…wow… Lots of proud moms and dads….yes for completing their own app and seeing it on the smart phone…but more so of their son or daughter for a great evening of teaching and learning.

And we had come to the day of the presentations…

With just a few hours left before the big event, Trey came to me for guidance on the best way forward. It was apparent that the video recording was not going to work as he wanted and I did not want him to spend any more time on this than he already had. Anything he was going to get out of this project was already learned. He had already written three apps and recorded the tutorial twice and had little to actually show for it. And yet he was still as excited and energetic and optimistic as he was two weeks ago. Here we were a few hours before the Parent Workshop, the “performance” that night counts 25% of the grade. He decided he would perform his tutorial workshop LIVE with his parents. Lots of unknown issues and risks come along with LIVE performance, but he confidentially said he was comfortable doing it that way, in fact was looking forward to it. 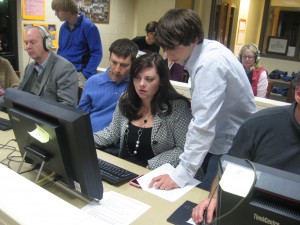 And so the event came, 30 parents and 15 students crowded the lab. After my brief introduction of the evening activities, students led their parents through the how-to and why for designing an app. There would be apps using UI controls, touchsceens, accelerometer, and GPS. As I walked around the room , I was so proud of all my students! Moms and dads were engaged with their computer screen and also their “teachers”, who were in control..confident..smiling… actually enjoying the experience. And I kept an extra eye on Trey just to see how he was doing. And every time I walked by, both parents were glued to the screen, immersed in their learning and project, listening to him with complete focus as he led them through an experience unlike any they’ve had.

And, to my pleasure and surprise, every student in the class, including Trey, was able to successfully lead their parents through the development of their app!

Despite numerous failures, numerous technical issues, time deadlines, and the pressures of presenting something LIVE to an audience….Trey worked through all those problems, held his head high, never lost control, (and in the middle of all this took an hour out of that afternoon to be the photographer for my other class’s presentations) and finished the evening with two very proud parents.

Trey’s experience the last few weeks, while I am sure he is glad it’s over, is exactly why we believe in our Computer Science program. There is freedom to figure things out, expectations are high, student self-direction is critical, both teaching and learning are part of the student experience, failure is part of the path to success and instead of failures stopping the learning…it inspires them to push on, problem solving and persistence is core to success, and passion for Computer Science is the backbone of the class.

And I have no doubt that he will succeed. Students like Trey are why teachers do what we do.