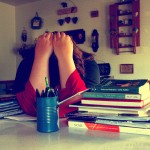 Grades are a major source of stress for every person involved in education: teachers, students, parents, and administrators. But, is the effort that goes into “grades” worth it? Is the benefit there? First, let’s make sure we do not confuse grades with feedback; they are very different. And, since we are here stirring the pot, let’s also make the point that grades do not always reflect the learning that takes place in the classroom. I know students who make great grades in AP and Honors classes but tank the standardized test. And don’t we all get frustrated with the kid who does not make much effort but who dominates at test time?! One of my top students got a 1 on the AP test because it was his last after 2 weeks of testing and (I quote) “my brain was fried.” He actually called me to apologize. I know students who are in the Honor Society who do not do well on the SAT test. The cliché response to grades is “we need them” and “we have to have them” and “how else can we compare students to each other”. Don’t even get me started about the BELL curve.

There are points to be made on both sides of the argument—and those arguments could take pages and pages of writing—-at some point I’ll attack that in my BLOG, but not today. (although you can read an older BLOG post that I wrote)

Today, JUST TO GET THE CONVERSATION STARTED, I am going to offer 3 scenarios where grades do not work(well). I’ll argue that these scenarios are probably more common than we like to accept.

Scenario #1
Consider the student who starts slow and so for the first 2 quarters of the class does not do as well. That student continues to work hard and improve. By the end of the class, that student has mastered the material, can demonstrate that mastery, and performs at the highest level possible on all final evaluations and examinations.

So, the student earned an 84 ( below mid “B“ ) for the year, an 87 with the exam grade. That average would NOT qualify for National Honor Society, Dean’s List, or other grade-centric reward system.

But, hasn’t the student done exactly what we wanted? Isn’t (s)he a success story of what education can be? (S)he learned from mistakes, made improvements, got better, and finished with complete understanding. Shouldn’t that student have earned an “A”, even “A+” ? 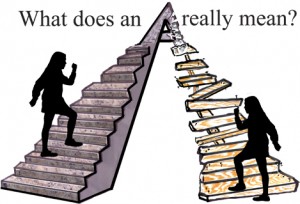 What does a grade really mean?

But, for this student, nothing came easy. (S)he had to work harder than most to have that level of success. (S)he was pushing herself to the limits in all classes and so when exam time hits and she has 6 exams during one week, all of which are incredibly challenging, there are going to be 1 or 2 which she does not do well on.

So, the student, who earned an “A” all semester long finishes the course with a “B”. All semester, every day, (s)he gave her all demonstrating expertise and “success” on various types of assignments and evaluations, then during 1 two-hour instance lost all of that. Yes, one option is say “tough luck.” As a teacher, I am not sure I could say that.

Scenario #3
How about the student who is one of those kids who just “gets it”. (S)he does not have to work as hard as most, and so does not. The class is boring for the student, so there is not much engagement during class. But, (s)he aces all of the quizzes, tests, and exams. 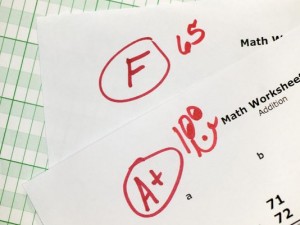 Feedback and grades are not necessarily the same thing

So, the student earned an 87 (“B”) for the year, an 89 with the exam grade.
So, in this case if the student has demonstrated full mastery of content, did not need the HW in order to get to that point, what then is the value of this grade? Yes, the student made a choice to do this, but isn’t the reason for HW to help understanding? And so in this case, is the grade a way to punish the student for not following the rules of class?

I’ll argue that these scenarios are probably accurate for more students than we might realize.

There are those who say that the grade in every class means something different— I agree;it does and it should— but if that is the case then it is in direct conflict then with the “standard grading” A,B,C,D, F model that most schools use. If a “B” in one class does not have the same meaning as a “B” in another class, then how can that grade have meaning outside of that class? Even teachers within the same departments and divisions at schools use grades differently. The problem with that is we use those grades in a standardized arena as well (college admissions, scholarships, awards, grants), and that can have unfair, inaccurate, and unintended consequences.

In my classes, which are heavily project-based, collaborative, and where my “homework” is not content-based(more context-based for connection to real world), every semester when I enter grades, I say to myself there has to be a better way. I have not yet had the guts, although seeing some of the work that Mark Barnes and Starr Sackstein are doing is really pushing me to try something.

I am not suggesting we throw out grades completely; I am sure there are some teachers who have found ways to use grades in an effective, productive, and accurate manner. It is those people from whom I want to hear. Let’s take the best of what they are doing and bring that into the conversation.

What I do not think is the best solution going forward is doing it this way “because we’ve always done it like this.”

There is a different way to look at education. As a parent, teacher, student, administrator, or policy maker, keep your eyes and ears open; but look differently and listen better. If something I said here makes sense to you, then we should probably connect. Find me.