Ben: Why teachers do what we do

It’s the end of the year, exams are coming, teachers and students are a bit cranky and stressed, spring fever is still lingering as students are exhausted from a long year of rigorous academics. AP exams have wreaked havoc on schedules. Everyone is ready for the year to end. Except Ben.

These past couple years have been inconceivably rough for him. Within a few short weeks, he went from being a typical teenage to being a human being on the verge of a future unknown. It was discovered that he had cancer. And so as the rest of the world went about its business of homework, quizzes, reading novels, and presenting projects, Ben set out to survive. And survive is what he has done.

But, this is not a story about his ordeal in the hospital, but it is a story of what came next, and what is coming next.

I had the honor of being involved in two events recently which are quite simply amazing. 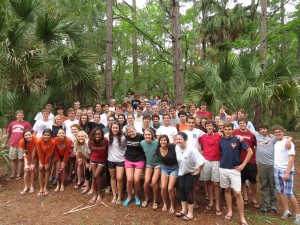 Our 11th graders decided to put together a class camping trip down to a beautiful state park near Beaufort, South Carolina. It was a sunny day full of beach soccer, Frisbee, beach football, playing in the waves, walking in the sand, building sand sculptures, bon fires, and ‘smores. But, the defining moment was when the class officers split up the grade into 5 teams, and created an obstacle course race that would pit wit vs. wit, speed vs. speed, and agility vs. agility. One of the events involved running 100 yards at full speed out to the surf, collect a bucket of water, balance it on your head as your ran back to deliver and dump it through a hula-hoop, then run back, dip your face in the ocean water yet again, and sprint back to the finish line. I had been helping to manage and keep score, so was not necessarily playing attention to who was actually competing…but more so that people were competing and following rules. And then, I looked up and saw two people sprinting towards the “finish” line. One of them was Ben…a huge smile on his face, chest out like Coach Salley and Coach Knight teach in cross country and track practice. Yes, there he was, head full of hair, barefoot in the sand, and running towards us. I am glad no one was paying attention to me because they would have seen a 46 year old man tear up and just stare in amazement. Only an English teacher could lead us through the many levels of symbolism and meaning in that sprint.

As if that needed a follow-up, I had the privilege of witnessing yet another powerful Class of 2014 event: Honor Council elections. I remember several years ago, when Ben was voted by his classmates to be the class representative to serve on the Honor Council, a student-led organization that helps promote and enforce the school’s 100+ year old honor code. It’s one of the most important, yet gut wrenching and challenging jobs at our school. Once you are elected to the council, you serve for the remainder of your time at the school. Anyone would surely understand and even support Ben stepping down from that role to focus on more important things, such as beating cancer.

Nope. Far from it.

Each spring, the members of the Honor Council vote for who will lead them as Honor Council chairperson the following year. It was a not a sprint down the beach like before, but instead it was a sprint of honor, integrity, dedication, commitment, and perseverance. Ben was elected to serve as the 2013-2014 Honor Council chairperson. Here is a boy who has survived perhaps the greatest ordeal possible to humankind, and yet one of his first acts of survival was to step up and lead his school.

That’s leadership; that’s humanity at it’s best and it is because of students like Ben that is why teachers do what we do.