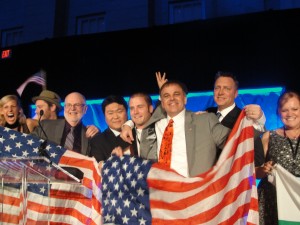 So, a week or so has passed since I returned from perhaps one of the most amazing experiences of my life. And I have been asking myself in a variety of different ways, “What just happened?” And I think the answer to that is far from obvious. Any time you are part of team that wins an award that distinguishes you, of course it feels great because it is confirmation that all your hard work, all your crazy ideas, and all your persistence does have an impact and a message that is being heard. And for most people, as with myself, that alone is worth every ounce of time and effort that goes into our work.

One of the pleasures of an experience like this is the chance to interact with people from all over the world through almost every available media including Twitter, Facebook, Blog, website, E-mail, postal mail, cell phone, Skype video call, audio conference call , and probably even a few more. And we have all been telling our stories, sharing our ideas, commenting on pictures and video taken during the week in DC at the many social and professional events planned by Microsoft, and making collaborative connections to bring into our classrooms. 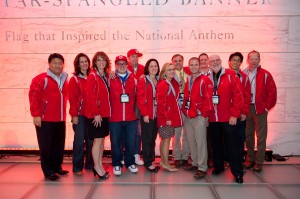 And I think I have identified the common thread about what was REALLY so great about experience…I may have found out what just happened! In our day-to-day life at our schools, in our cities, and at our jobs, we face many obstacles, many limitations, many reasons why we cannot do something, people who are not motivated or passionate, policies that are in the way , rules that prevent you from doing things, and hundreds of reasons why you cannot do what you want to do.

Last week at the Microsoft Global Innovator Education Forum, I interacted with over 700 people (not sure if I met all of them, but I tried) from over 75 countries. My fellow TeamUSA colleagues were second to none and we came together in so many ways! We worked together with the team from Microsoft….one of the most supportive and professional teams I could imagine working with. I interacted with people from almost every religion, culture, economic status, belief system, gender, race, sexual orientation, rank, career title, and personality. And the overwhelming message I heard over and over everywhere I went was not “No, you cannot”, but “Yes, and how can I help you?”

Instead of reasons why this idea just cannot be implemented, I found people who had not only already implemented it but asked to be able help me implement it at my own school. Instead of reasons why this technology might not work, I found people who had gotten it to work and would gladly help me figure it out at my school. Instead of policies that seem to be restrictive, limiting, and unproductive, I found administrators who made policies that support innovation and were glad to offer their advice. Instead of a media that was focused on “dirty laundry” news bits, I found media who were focused on positive ideas and people and were excited to share success stories instead of the many failures we see on the nightly news. Instead of colleagues who spend their day defending their turf, I found comrades who crave interactions across the curriculum. Instead of fellow teachers who have lost the passion in their classroom, I found fellow teachers who might even be more passionate than I am. Instead of people who shy away from hard work or challenge, I found people who eagerly smile with the chance to do something challenging and difficult. Instead of spending countless hours debating insignificant issues which sometimes fill up our meetings at home, I spent countless hours discussing new ways forward, ways to improve education, ways to work together to help teachers and students succeed, ways to make education more engaging, ways to connect better with our students, ways for me as an educator to raise the bar, and ways to try to make the world a better place.

Everywhere I turned I was welcomed with an open handshake, smile, an occasional hug, one awesome chest-bump, a dynamic high five, a few yells and screams, or perhaps just a Konichi wa, Marhaban, Bonjour, Hola, or Ni hao. But, it was always a genuine welcome and it always led to a passionate conversation that was centered on making education better. 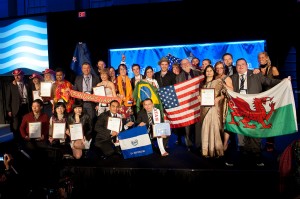 If the world is looking for better ways forward in education…..try spending a few hours in a room of optimistic, passionate, eager, and dedicated educators from around the world. The answers are not hard to grasp. We as a human race trying to find our way into the 21st Century have got to find ways to say “Yes” much more than the world says “No.”

That is what just happened.