Do we really need to dedicate an entire week dedicated to bringing attention to our discipline?

Do we really need to try engage an entire planet in just trying out our “discipline” for an hour?

Are we really at that point? In a world where most people probably have several digital devices near them at any time…how can we possible not even know what Computer Science is

90% of the school in the USA DO NOT teach Computer Science.

Well, first I’ll argue that Computer Science is not a traditional discipline in the same way that History is. It’s a way of thinking, and a set of skills with a blend of creativity and building, and a set of tools that are “behind” not only every other discipline, but behind virtually every aspect of life. And you can like that or not like it but you cannot deny that. In the same way that language is part of what we do all day, every day, wherever we are, whatever industry we are in, whatever grade we are in, or economic status we live in.

So National Computer Science week is a nationally designated week that was created to give schools and communities a chance to focus on and plan learning events and teaching opportunities centered around Computer Science…especially in schools, or cities, or even countries that don’t necessarily know what Computer Science is, nor it’s value to their own business and economy. 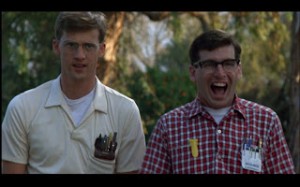 ..the perception of Computer Science in the 1980s..

One of the biggest problems is quite simply that we have a ton of 1960-1980 “baggage” we are digitally dragging behind us. There was a time where you had to be a top engineer/mathematician/research scientist in order to have any chance of interacting with a computer and putting it to work for you. The world still has this image in their mind when they hear Computer Science. It was truly an elite group of people , super-smart, nerdy, and typically social loners.

Additionally (and sadly) , we still have schools teaching keyboarding and Microsoft Word, and calling that Computer Science. They are truly draining the digital life out of their students. Their students come to them eager to explore, create, and learn—they LOVE the technologies that are in their hands and on their desks. They don’t want to type letters and insert clip art pictures.

Initiatives such as Hour of Code encourage, allow, and enable people (who are willing) to explore Computer Science “along with” their students. We don’t need(nor want) 1980 nerds; we don’t need Computer Science experts, we don’t need you to already know how to program. We just need you to want to try something new. But we warn you–your kids are gonna love it. You yourself may actually find that it is addicting. Yes, it’s hard…but not hard like memorizing a complex Physics formula or BC calculus equation, but hard like “oh man… I really want to make my program function like this, my game go “like this”, my app do that…..and there are so many ways to do it…I just have to figure out which way is best” kind of hard. I joke with my parents of our students, “Your child will learn integral calculus or advanced gravitational equations in order to have their alien bounce across the screen and shoot a green laser blaster.”

So, what exactly is the Hour of Code?

Well, it was started by CODE.ORG (if CODE.ORG was a for-profit start-up, everyone there would probably be millionaires) and they have taken the lead on providing resources and advertising and mass marketing —with a very simple goal: To help the world understand what Computer Science is and help bring it into our educational system. One of the ways they do this is by simply trying to help introduce what it is to as many people as we can—even if just for one hour. 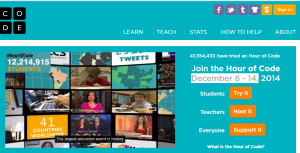 There are numerous self-paced, interactive, fun and engaging, “no need for a Computer Science teacher” online tutorials for EVERY grade level. All that is needed is for a school, a parent, or a teacher, to be willing to take small chance and “let go”. Let the learning happen by actively doing, instead of passively receiving. Difficult concepts are actually introduced, communicated, and reinforced, through the activities themselves. Maybe you learn how to build an app, a small program, or even a small game. Especially with research leaders such as Jane McGonigal leading the way, we know that games and gaming are huge attractors and motivators for people (not just students), so we tap into the built-in energy that exists around games, and we use that to let a first Computer Science experience be an engaging one, full of interaction, creativity, accomplishment, and understanding…. and a desire to know more.

Any Computer Science teacher will tell you that we don’t even pretend to be only expert in the room when there is Computer Science happening . There are far too many languages, technologies, gadgets, and tools to be in command of all of them. On any given day, I learn 5 new things from my students and through my continued exploration. In my school, our projects in class are advanced and complex, I have to work just as hard to help students with their project as they work doing their project.

At our K-12 school, we have Computer Science , real Computer Science, happening as early as 5th grade…and we hit it harder starting in 7th and 8th, and then we just open it up full volume in 9th-12th. So, our kids are getting hundreds of “Hours of Code” each school year, so our “Hour of Code” actually focuses on our parents. They are the community leaders, business owners, politicians, and outspoken citizens who can be of huge help in trying to get the word out.

Because most school don’t have Computer Science, or don’t even offer it except as a 12th grade elective, it has not become part of the academic journey for our best students. By the time they get exposed to it, it’s almost too late.

“….So, are you suggesting that because a kid spent one hour going through a tutorial for how to make Angry Birds and (s)he can have a bird flap around on the screen, that they have had a Computer Science experience?…”

Are they qualified to work in the industry designing software? Of course not. But, did they find themselves understanding the basics of how to build something using commands, seeing how to manipulate the technology in front of them, and explore the different ways of breaking down a problem into step action steps, and being willing to “try this” and “try that”. In order to have Angry Birds hurl across the screen into Pigs, they will explore concepts and constructs such as conditional statements, looping, variables, data storage, and graphical display—all of which are part of Computer Science. Those exact same techniques and skills are used in every industry in almost every programming language in order to help design software for banks, small businesses, factories, websites, restaurants, engineers, real estate firms, tax returns, and schools.

Perhaps because of an unexpected & engaging one-hour experience a student might decide to take a class, explore a club, read a book, or even try an entire online tutorial and see if it is something they can engage with. They might open their eyes to an entirely new world—-one that has been right in front of them their whole life that they just did not see.

Yep the demand is there.

That’s why I say “Yes, making that Angry Bird game was not only worthwhile, but critical for our future”

There is a different way to look at education. As a parent, teacher, student, administrator, or policy maker, keep your eyes and ears open, but look differently and listen better. If something I said here makes sense to you, then we should probably connect. Find me.