First, why do I keep putting Computer Science in between “” ? I guess I could have put it in ALL CAPS? Ha!

Because the phrase itself is not accurate.

The definition of Computer Science is changing

Ask 100 teachers from K- 12 and also from the college level and you might get 101 different answers (one might answere twice). Over the last 3 decades, the world of technology and the tools that power and give life to that technology have changed more rapidly and dynamically than any industry in recent history. For starters, the phrase “Computer Science” itself we have been using to represent all computing and technology-related areas of study. And at one time it was a narrowly defined area specifically targeting a very select type of person as well as very specific skillset; it was targeting(and hit dead center) the hard core engineer-minded person. That is where the traditional stereotypes came from. But over the last 3 decades, we’ve seen “Computer Science” become the backbone for most industries, much like reading and writing. Think about it: experts in any industry who also know how to create new digital tools to solve their problems quickly become the leaders in those industries. So we have seen Computer Science expand into, contort with, morph through, and merge alongside areas that can take advantage of what it offers: artificial intelligence, biocomputation, engineering, graphics and animation, ,human-computer interaction, business information systems, networking, cybersecurity, media, social media, people, aerodynamics, modeling, and economics. Just to name a few

Why this sudden recent attention and fuss about Computer Science?

People are starting to understand what it is, and hence, its value. What parent doesn’t want their child to have leading edge skills of creation as they enter the world?!

It’s quite simple. “Computer Science” (representing the various areas I talked about above) is quite simply a way of thinking and set of tools that allow a person to “capture their imagination.”

What the heck does that even mean?

In English class, a teacher asks you to think about something and perhaps write an essay or a poem. After you write that down, it can be read by others. In an art workshop, your teacher asks you to draw a picture of something beautiful and so you add color and lines to a canvas. And those are certainly beautiful, but they are also permanent; they are not interactive.(well, except for those cool 3D illusions things where the picture comes into focus, or those New York sidewalk paintings where you look from a certain angle to see the scene.)

Digital tools are interactive. They allow the tools themselves to become fully customizable by whoever is using them. They allow tools to even create other tools. Software can be designed to allow the user to have as many choices, selections, and options as wanted. And it can be used differently every time it is used. And it can be modified to expand it’s functionality. A smartphone app can incorporate the environment through sensors such location, temperature, angle, proximity, radio waves, and force…… and then also user-controlled elements such as touch screen, voice, selections, eye direction, even thoughts. A device can be an autonomous car, robotic arm, a Hololens, scientific instrument, a drone, or a camera. When times change, or demand changes, or ideas change, or needs change….so can the software. But maybe the software is fine, but the hardware changes? Maybe someone imagines a better, slicker, cheaper, nicer, different, or newer widget. Awesome. Now, we have have captured imaginations, even as they change in real time.

That is one reason why Computer Science is becoming mainstream. It never ends. Your project can always be updated, enhanced, and redesigned. New devices can always be incorporated. Fresh and even off-the-wall ideas can always be incorporated. Computer Science is the environment and set of tools that allows for that. In my own classes, we design apps, games, and simulations. I tell students, “…you will never be done with it, but you can get to a point where it is your best work at the time and it does what you wanted it to do at that time. There is always something you can add or a feature you can implement or improve. So go ahead and turn it in now, but continue to work on it on your own time long after it is submitted….” Many do just that.

In the project-based Computer Science class, there is no chapter that we have to finish. There is no lesson that signifies the “end of the learning.” There is no specific skillset or language that is all you need. It’s just time that is the bounds. The end of the quarter, semester, or school year are what determine the “end.” But because of the technology itself, they can continue to work on their project on their own phone, laptop, tablet, or smartTV at home, from anywhere on the planet (oh yeah, and also in a plane with wi-fi). Oter subject areas might stop for the summer or spring break, but Computer Science tends to keep on keepin’ on. 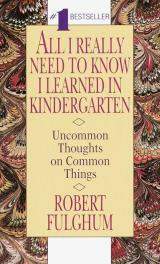 Apparently the saying and book, “Everything I Need to Know I Learned in Kindergarten” really holds true even in, especially in, this world of technology. When we are 5 years old, the teacher asks us to draw pictures in our sketchbook, build things during craft time, use the colored markers to draw on the whiteboard. They are developing the skills that “capture imaginations.” Those tools were colored pencils, pipe cleaners, glue, glitter(ugh!) ,markers, stencils, and easels. Now in Computer Science we are doing the same thing, “capturing their imagination”, but doing so with a different set of tools, where the tools are constantly changing to handle the real world problems that are also constantly changing. The tools themselves are created through Computer Science.

That’s why Computer Science is at the forefront of educational conversations today.