What happens when you put 250 educators from around the world in one place for 4 days? 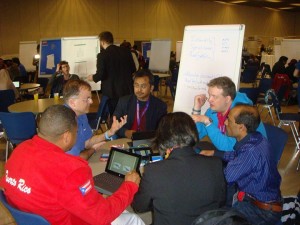 My team(#49 yes we rocked!) had members from Puerto Rico, Mexico, Mauritius, Malaysia, Finland, and the United States

Borders break down, politics don’t matter, despite the Law of the Conservation of Energy,–energy is in fact created, differences are embraced, cultural differences are cherished and discovered—and even sought out. Ideas are shared. Collaboration happens. Friendships are made. Relationships are built. Connections are made. You can see the bar rising. You can feel education literally getting better right in front of your eyes. The world became both a bigger and smaller place all at the same time.

What was the Microsoft in Education Global Forum? 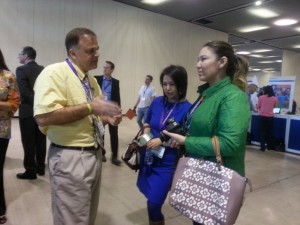 Each teacher was excited to present about their own project

For 2 days, teachers present their project to fellow educators, judges, friends, political leaders, and educational leaders. I gave my “3 minute pitch” on the airplane, in the airport, in the hotel, in line at the store, in the conference center, at lunch and dinner, and of course to my judges. I think I gave it a couple times in the hotel lobby as well, and probably on the elevator. You see, the people there were passionate about what they did, excited and qualified to be there, and take every chance to make a connection and share an idea- to get to know a fellow educator. 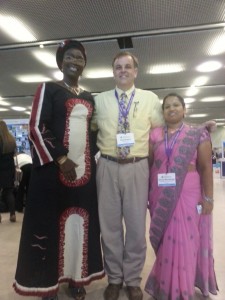 Ever been in a crowd where you really wanted to meet someone? Now, imagine that room is full of people who all think like you, believe what you believe, and have the same vision as you. We had the best first line. “Hi I am Doug from the United States. I’d love to hear about what you are doing”. And any person there was so excited to be able to give you their pitch. And I equally as excite to hear it, and figure out how I can bring some of their energy and ideas back with me . I remember we were right in the middle of breaking down our tables, judging was over, people were leaving to get ready for dinner, and I was still “presenting” to people who came by my table. I think eventually, they kicked us out because they were closing the room. I noticed that there was a large number of people who also were doing the same thing as I was. Sorry, we just couldn’t stop. No apology was necessary. 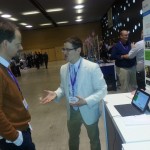 But, it’s just another conference right?

First, it was a tremendous honor to be there. Only 250 educators were selected out of over 22000 applications. I am not saying that to boast, but more so to qualify the people who were there. This group of people is the inaugural Expert Educators Class of 2014. What that means is that you are meeting some of the most innovative teachers from around the world. Each of us spending 10-20 hours on our applications and making it through a rigorous judging process just to be here. One of my friends, David Renton, was the only representative from Scotland; he WAS Team Scotland. What a tremendous honor for him! And a pleasure to meet him and see the great things happen there! 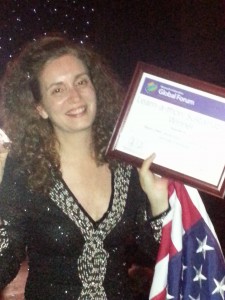 Yes there was an element of winning, but what is interesting, there was not necessarily an element of losing, at least in the group I was with. And that is rare. Because I met so many people from all over, all doing amazing things with their students in the classroom, it was very likely that someone you knew would be recognized with some type of award. And when you heard any name that you knew, you rushed over for a photo and a high five because you wanted to share that joy with your new friends- and they wanted to share that with their new friends. While I did not win an award, I still won.

We had 2 days to share our ideas, explore other ideas, talk, and meet new people. Most conferences, such as ISTE, while there are some great people there, are centered on the idea of 1 directional presentations. Those conferences do have value, and I do enjoy them, but they are a different type of experience. You are more likely to get some good resources, rather than make real connections.

So, what exactly is this “conference”? Well, the idea of getting innovative global educators together in a forum such as this has been something that Microsoft has been doing for many years. They don’t advertise this; they don’t get much credit in the media for doing it; yet they do it anyway. Each year, the location is different: South Africa, Washington DC, Barcelona, Prague. In some years, there were similar events held at regional events (i.e. just for Europe or Middle East-Africa and these award winners from those events would be invited to the international forum). But each year, hundreds of educators and school leaders from around the world are invited to come to the forum, sponsored by Microsoft Education.

When most people think about Microsoft, they think “Word”, “PowerPoint”, “Windows”, “SQL”, “Xbox” and certainly those are great tools and products, but that is not the side of Microsoft that puts together this event; welcome to Microsoft Education: Partners in Learning, an arm of Microsoft dedicated to providing resources, software, networking, and partnerships to any and all schools and educators around the world. I am sure in the back of some minds, there is a hope that by supporting and sponsoring and leading events like this, there will be recognition for Microsoft, which indirectly can affect their commercial side, but in truth…this side of Microsoft is spending more than it makes. Events like this, put on in a world class fashion, bringing together people from over 90 countries costs money, (wo)man-power, energy, effort, attention, time, and commitment. Last year, Microsoft announced it was infusing 750 million dollars into promoting efforts such as this. Why would they do that? To support and promote innovative teaching and teachers; to show the world that there is another way to “do” education; that those innovative ways are not only working—they are changing the educational landscape as we know it. And it is not just going to take a village—it is going to take the whole world to change the world.

School systems around the world must be embraced/owned/led by the people, not government. It is important that the people of the world take ownership of bringing education into the 21st Century. The days of rote lectures, random note taking, multiple choice tests, doing the questions at the end of the chapter, and standardized tests must start to become the old ways, outdated in pedagogy. The students of today, in order to be problem solvers and leaders for the current and future generations, need a different style of learning environment. The world around them is interactive and dynamic, why cannot their learning also be vibrant and alive? With the advances we’ve made in science, understandings and discoveries in history, computations in math, the ability for us to communicate instantly and widely on an international level, and analysis of data like we’ve never been able to before–our education systems have the potential of being as dynamic as that world outside of school campus–yet many of our schools remain stuck in 1950-style of content delivery with students passively sitting in chairs, missing most of what comes at them. Is that the best we can do? Hence the need for this conference. People now are able to write their own software, build their own devices, and command those devices to solve problems–we can literally design our own tools to solve the problems that we do not even know exist yet. Think about it, how many digital devices do you have in your own life right now? 10 ? 20?

Technology is an integral part of life. Those who command it will be the leaders of the next generation.

The world around us is different than it was even 20 years ago. No longer is life one directional. Life has become interactive. We are longer able to sit on the sidelines and watch the world go by. We can communicate, problem solve, play, learn, read, study, participate interactively—and not just with those we know, with anyone in the world who wants the same thing. It is because of that world, that it is crucial that the people of the world change the way we educate. All across the world, our governments have grown so large and the world has become so complex, that it is no longer practical that our governments lead the way in education. Top down policies and laws that helped us find our way over the last 50 years do not make as much sense anymore. The role of our governmental leaders, still incredibly valuable, will transform into support roles helping cities, states, and countries accomplish the goals that are being defined by the people in the schools. 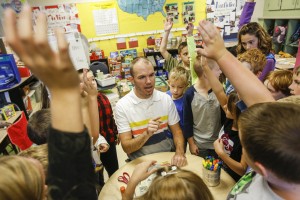 The only way for “education” to work is if it is from the ground up. Teachers, schools, districts, parents, and students must take ownership. The companies that are going to hire these students must communicate the qualities that they need. School is preparation for life that we are going into. We have to be careful that schools are not preparing students for life as it once was. If our students are going through school memorizing vocabulary, formulas, and dates…and then regurgitating that back to us every 2 weeks on a content-heavy test, and then taking a 3 hours scantron exam at the end of the class, then we are failing at our jobs.

That is why conferences such as this one are not only valuable, but crucial. We cannot wait for our political leaders to raise the bar of education…it’s not their job…that is the responsibility of the people..us…you and me…and him…and her…and that guy…and this lady…and that school…and that district….. 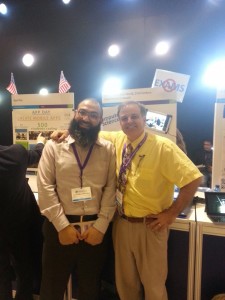 It was great to meet Ismail from Jordan.

There is a different way forward in education. If something I said makes sense to you…we should connect. Find me.